On 9 February 2021, join us for a research seminar on migrant urban diversities where prof Garbi Schmidt, Linda Lapina, Aske Kvist and Christian Groes from Roskilde University will be presenting their latest research. 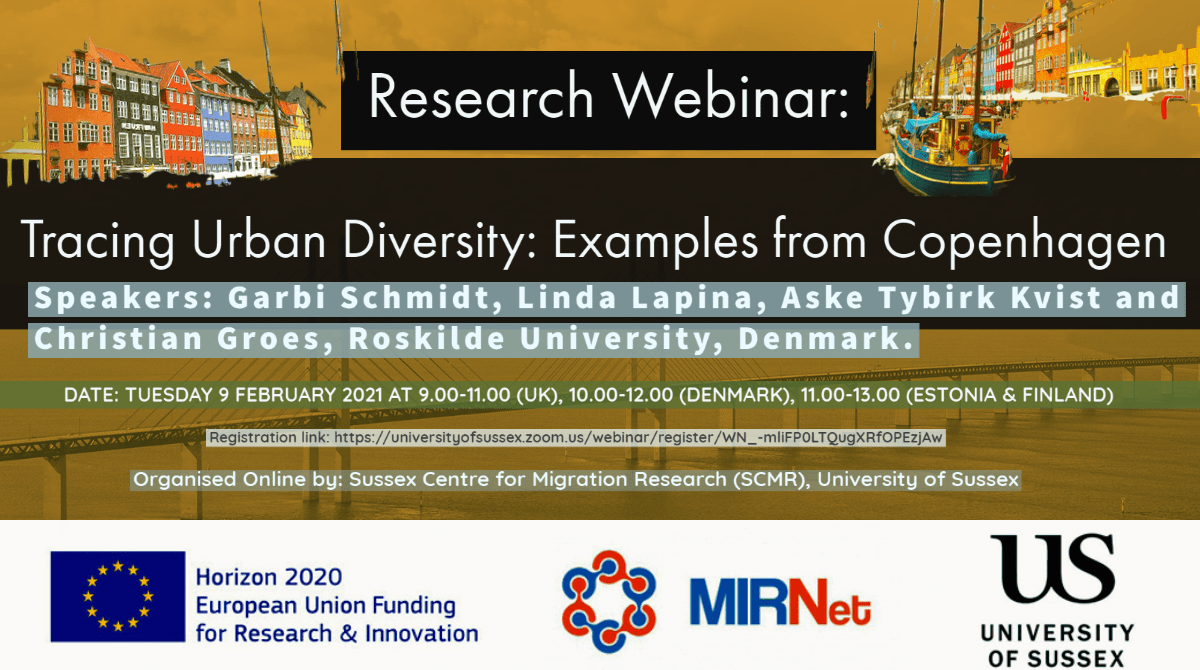 Please register for the event in advance here and get acquainted with the presentation abstracts below.

What is a ghetto?

Over the last two decades, the concept of “the ghetto” has been used excessively in Danish public debate over the migration and integration of non-Western immigrants. This study, which is inspired by Foucault’s discussion of historical a priori, explores what can be learned from further historicizing this discussion and assesses whether the discussion is actually new, how it is new, and whether it has changed or not. Empirically, the presentation builds on simple searches of the word “ghetto” in all Danish newspapers and policy papers from 1850 to 2018. The presentation underlines how perspectives on “the ghetto” changed in the 1980s when immigrants became synonymous with Muslims in Danish public debates. In this political debate, the concept of the ghetto is linked to those of “the mosque” and “parallel societies.” The results are a new way of disciplining and excluding ethnic and religious minorities.

In this talk, I trace the figure of diversity tourist, based on fieldwork and interviews in Copenhagen’s gentrifying and diverse Nordvest district. I explore how white Danish-born residents, seeing themselves as contributing to gentrification of the area, position themselves as ‘tourists’ vis-à-vis racialized diversity. They perceive diverse Others as true locals whose presence stimulates and entertains, as well as facilitates self-development, increased awareness and inclusive pedagogy. Moreover, the local spaces and people of Nordvest represent a different or superior reality and promise an escape from white, gentrified Copenhagen. I collect these practices in the figure of the diversity tourist to show how a particular brand of Danish middle-class whiteness emerges through embracing diversity and reminiscing over one’s own privileges vis-à-vis racialized, less advantaged people and spaces. The study prompts us to reconsider who has the power to frame urban ‘diversity’, as well as the role of researcher gaze and positionality in diversity research.

Nørrebro United: Creating spaces for diversity through a football association in an increasingly exclusive neighborhood

This talk will be a tentative outline of my engagement with Nørrebro United, a voluntary non-profit soccer association in multicultural yet highly gentrified neighborhood of Nørrebro. The last 20 years the prices of apartments have increased tremendously – a huge influx of young urban middle class has changed the constitution of the neighborhood and “the ghetto laws” and their administration is making the contrast starker. Statistically Nørrebro is still a poor neighborhood, but the poor have become poorer and the wealthy have become increasingly wealthy.

Nørrebro United is a soccer club established in 2008 with the goal of creating friendships and bridging divisions based on class, ethnicity, gender, etc. through soccer, which is the most popular sport in Denmark within most demographic categories. The association has had a huge success, expanding from zero to 2000 members in 12 years, but the popularity has turned into involuntary exclusivity due to the lack of facilities and at present 500 kids are pending to join the club. With rising exclusivity the virtues of the middle class become paramount – long term planning, muddling through, networking, volunteering – become strategies by which the middle class has become a an increasing majority in the association.

But how does an association built upon democratic and demographic inclusivity and non-discrimination navigate when the diversity loving middle class starts cannibalizing the existing diversity?